Role of the Lieutenant Governor 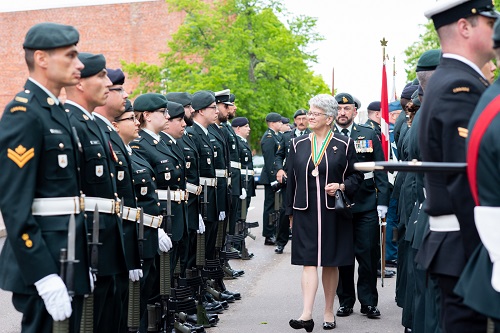 The Office of Lieutenant Governor

The post of Lieutenant Governor was established in 1769 as part of the initial administration of the Island colony. The British North America Act of 1867 created Canada and a national (or federal) government, and local (or provincial) governments in the former British North American colonies. The Lieutenant Governor, who had formerly reported to the Colonial Office in London, became initially, an officer of the Government of Canada. In Prince Edward Island, this change took place in 1873 when the colony exchanged its earlier status for that of a province of the Dominion of Canada.

Since the Statute of Westminster of 1931, Canada has been a fully sovereign country; however, Canada has chosen to remain a member of the Commonwealth, a voluntary association of independent states representing approximately 25 percent of the world's population. Her Majesty The Queen is Head of the Commonwealth.

Her Majesty The Queen is the Canadian Head of State and thus, the Queen of Canada under Section 9, Constitution Act of 1867.

Representative of the Crown

One of the most important responsibilities is to ensure that the Province always has a Premier. If this Office becomes vacant because of death or resignation, it is the Lieutenant Governor's duty to see that the post is filled. The Sovereign's representative has the same responsibility if the government resigns following a defeat in the Legislative Assembly or in an election.

The Lieutenant Governor is an important element in both the Legislative and Executive Government of the Province, and summons, prorogues, and dissolves the Legislative Assembly, as well as reads the Speech from the Throne at the Opening of each Session.

With the advice of the Premier, the Lieutenant Governor appoints and swears in members of the Executive Council and is guided by their advice as long as they retain the confidence of the Legislative Assembly. Moreover, the Lieutenant Governor gives Royal Assent in Her Majesty's name to all measures and bills passed by the Legislative Assembly, and signs Orders-in-Council, Proclamations, Crown Grants and many other official documents, all before they have the force of law.

The Office in Law

The Offices of the Monarch, Governor General, and Lieutenant Governor are entrenched in the Canadian Constitution, and no changes can be made to the offices without the unanimous approval of all Provincial Legislative Assemblies, the House of Commons and the Senate.

The Lieutenant Governor is appointed by the Governor General, on the advice of the Prime Minister of Canada, for a period of not less than five years. Those appointed are generally persons who have served their country and/or province with distinction for many years.

The Canadian Crown is a distinctive and essential part of Canada's heritage and character, and thus a focus for national pride. It is an important symbol of unity, serving to bind Canadians together in their common ideals and aspirations. It is visible proof of the vitality of our traditions, the permanence of our institutions, and the continuity of national life.

As representative of the Crown in Prince Edward Island, the Lieutenant Governor is both personification and custodian of these traditions and ideals.